OG Boxing Results from their Summer Heat show on August 6th 2022 at the Glendale Civic Center, in Glendale Arizona. 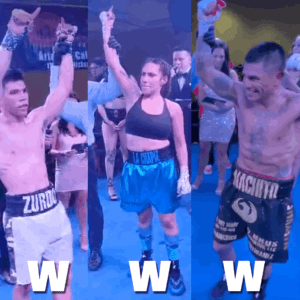 This was a trifecta for Old School Boxing having three boxers on the card from Fabian “Zurdo” Rojo with his pro boxing debut and kicked the night off in the first bout, along with Mellisa “Mely” Zuniga going after her third win as a pro in as many fights and last Walter “Wacho” Melchor, returning to the ring after a few years away from the game.

Fabian “Zurdo” Rojo had his professional boxing career debut Saturday night at OG Boxing Summer Heat against John Derek Amado (0-1) fighting out of Hammers Boxing in Phoenix Arizona in a 4 round contest.  Amado had enough after two rounds and would not return giving the win to Rojo by RTD or referee technical decision otherwise referred to as corner retirement or corner stoppage.

Melissa “Mely” Zuniga (2-0) would take on Alexis Martinez (1-4) out of Salinas, California fighting in the atom weight division. Martinez proved to be a tough opponent and could take a punch from Zuniga but would take the bout by unanimous decision for her third dub.

Walter “Wacho” Santibanes (8-2) would return to the ring after seven and a half years to take on Jose Miguel Diaz Valenzuela out of Central Boxing Gym in Phoenix Arizona. (8-3) in a six round contest.  This action filled fight would go the distance and Santibanes win by unanimous decision claiming his first victory in some time. Welcome back Wacho.

Danny Barrios (8-0, 2 KOs) would take on journeyman Ernesto Guerrero (33-34) out of Agua Prieta,  Mexico in an eight-round contest. Barrios would win by unanimous decision claiming his ninth victory.

Bryan Bohen (1-0) out of Hammers Boxing in Phoenix was against Troy Sanders (1-3) from San Bernardino, California.  David George would stop this contest in the second round 2:50 giving Bohen the victory by TKO.

Maximus Romeo Castro (3-0) was taking on Francisco Muro (3-9) fighting out of Tucson, Arizona.  Castro would win this four round contest by unanimous decision.

Winning Boxer Interviews by All Around Boxing