at Celebrity Theatre in Phoenix Arizona on July 30 2022.

Old School Boxers, Brian Velasquez and Sergio “Checo” Rodriguez were on the Iron Boy 60 card for July 30 and performed as expected. 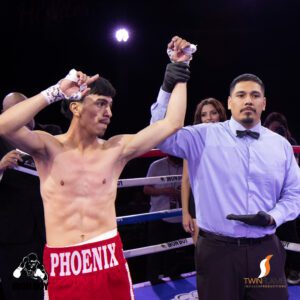 Brian Velasquez (4-0) @brivnvela returned to the ring after 12 months with a first-round TKO of Justin “Hurricane” Cole (0-4) out of Loveland, Texas.  Cole was put on the canvas three times in the first round by Velasquez, bringing the bout to a stop at 1:38 by Joey Chavez – 3 knockdown rule in effect and exercised. Brian Velasquez improved his record to 4-0 with 3 KOs. Hope to see Brian back in the ring soon to bring more excitement to Phoenix boxing. 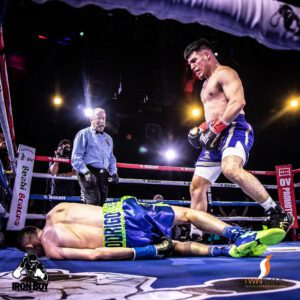 Sergio “Checo” Rodriguez (3-0-1 with 3 KOs) @checo.s.r took his talents to new heights with another explosive KO in the first round, making his bout, hands down the favorite for fight of the night at Iron Boy 60. Checo listed at 5’8″ on boxrec took on David Rodrigo (0-1) standing at 6′ if not 6’1″, not listed in boxrec.  This was Rodrigo’s pro debut out of Sonny’s Boxing Gym (@sonnysboxinggym) in Goodyear AZ.  Rodrigo with the definite height advantage used his stick to keep Rogriguez at bay for the first moments of the bout.  Rodriguez quickly tired of the slipping Rodrigo’s jabs, went into Checo Mode and made Rodrigo pay, bringing the bout to a halt at 1:48 of the first round with a vicious left hook that stopped Rodrigo, putting him on the canvas for the second and last time of the contest, reffed by Tony Zaino.

Sergio Rodriguez has catapulted his Iron Boy status, becoming a favorite boxer with Iron Boy Promotions with his explosive, powerful, performance each time he steps into the ring for the promotion company and the fans love it.  Checo! Checo! Checo!

Jesus Ibarra improves his record to 15-0 with a win by unanimous decision (UD) in 6 rounds over 28-year-old Damian Alcala at 4-1. All three judges had the bout as a shutout, 60-54 in favor of Ibarra.

Elias Terraza (3-0) won a 6-rounder by unanimous decision (UD) over 36-year-old journeyman from Mexico, German Meraz with a 64-63-3 record. All three judges had the bout as a shutout, 60-54 in favor of Terraza. Terraza’s next bout will by September 1 2022 at Westworld in Scottsdale AZ. Opponent TBA.

Alfredo Escarcega (14-1-1) lost a tough fight by unanimous decision (UD) to Julian Smith (6-1) out of Country Club Hills, Illinois. All three judges had a shutout for Smith, 60-54.

Dante Stone (9-1) won by TKO stoppage at 1:17 of the third round by Wes Melton over Jorge Martinez (4-8).  Next schedule fight for Dante is against Phoenix local Chad Davis (6-15) at Westworld in Scottsdale, AZ.